Florin was born in Bucarest in 1967 into a family of musicians, a mother pianist and a father violinist, he delivers to him a passion for this instrument at the age of 4 years. Today Florin is one of the major violin virtuoso musicians on the international scene. He has developed his own unique sound and language, thanks to his solid classical training, but also with the experience of its many musical collaborations alongside the greatest musicians. 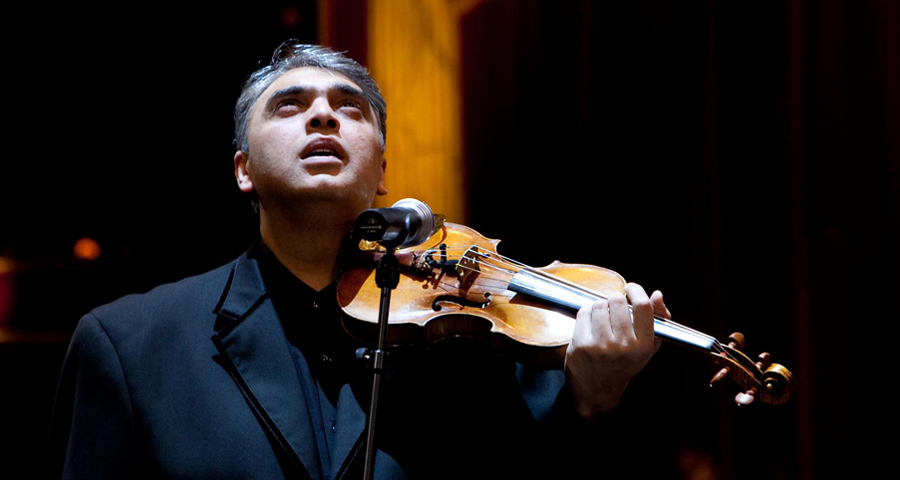 His impeccable violin technique and phenomenal virtuosity admired by all musicians and auditors, are never an end in itself, but the means to express his musical personality.. Similarly, the obvious spiritual filiation with his idol Stéphane Grappelli (1908-1997) is in no way a limitation on his own expression, but rather a goad that drives him to innovation. Florin Niculescu was born in Bucharest in 1967 into a family of musicians, a pianist mother and a violinist father, who delivers to him a passion for the instrument at the age of 4 years.
In 1973, at the age of 6, the little virtuoso joined the George Enescu Music Academy in Bucharest where he will come out with a first prize.
In 1984 he obtained a Special Jury Mention to Henri Wieniawski International Competition in Ljubljana.
He moved to Paris in the 90s and since then has never stopped to create and develop his art.
In 1993 he joined the quintet of guitarist Romane.
In 1994 he began his collaboration with bassist Jacques Vidal as a soloist in his own quintet with exceptional musicians like pianist Michel Graillier, guitarist Frédéric Sylvestre and drummer Simon Goubert.
In 1995 his encounter with Babik Reinhardt (1944-2001), son of Django, will signify a turning point in his career with the CD "New Quintet of the Hot Club of France."
In 1999 he recorded "Gypsy Ballad" which will be named "Jazz Album of the Year", and for which he will receive the award at MIDEM Talent Jazz 2001. There followed different participations to the greatest international jazz festivals such as: the “Vienne Festival” and "Jazz in Marciac" festival where he play the first part of pianist Keith Jarrett.


He starred with Bireli Lagrene, Babik Reinhardt, Jimmy Rosenberg and Bucky Pizzarelli in the first Django Reinhardt festival in New York.
In 2001 Bireli Lagrene decided to create a quintet named "Gipsy Project" to be identical to the "Quintet of the Hot Club de France" of Django Reinhardt and Stephane Grappelli, and asks Florin Niculescu to occupy the place of this last.
It was during the world tour of the quintet's second album "Gipsy Project and friends" that Florin Niculescu and Bireli Lagrene gave their badge of honour in the jazz manouche by sharing to a wide audience on the international jazz scene and taking up the repertoire of Django Reinhardt and Stephane Grappelli.
Now accomplished musician and exceptional artist recognized by its peers, Florin occurs internationally with its impeccable violin technique and his unique sensibility that makes it unique in the way he played.

• Francis Marmande / LE MONDE
So many volts, deflections, angles, graces at the same time, Florin plays so, and breathtaking natural, sharp and soft, silky and shiny.

• Bertrand Dicale / LE FIGARO
And suddenly here Jazz swept almost telluric breath, where the undeniable virtuosity of this graceful performer is irradiated by an overwhelming fervor and soul... The inspiration for this outstanding musician takes its melodic intuitive and ferocity when seen performing on stage. The archangel of the bow flew to tutoyer angels.

• MUSIQUE INFO HEBDO
Just listen to the last record of the violinist, Gypsy Ballad, and the depth of his playing seizes us... Florin... NICULESCU draws on his memory thats gypsy seeded, as did Django Reinhardt, the richness of jazz.

• Fara C / L’HUMANITÉ
His game is sensational in tone and in use of harmonics, technical fluency is amazing! Romantic or dramatic, with an extraordinary vibrato...