The history of different musical cultures who comes together, Classic... Improvisation... Two outstanding musicians, two phenomena, both from the conventional medium, two childhood friends gathered around a single project: East and West.

Florin Niculescu, violinist, a major virtuosos musician of the International jazz scene, ranked first jazz violinist in the U.S. and Europe. Paul C Staïcu, pianist, author and performer of the musical "Duel", featuring a pianist and cellist."Two outstanding musicians engage with hilarious settling of scores ... and finally trap the public in their vertigo poetic and humorous delusions. " 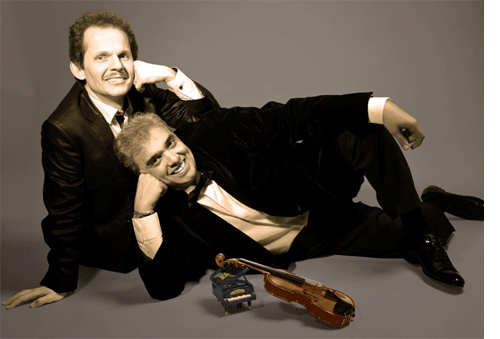 Two great musicians, two childhood friends, both classical and jazz music lovers, creators of "East and West".
improvisations of jazz in a classical score?
Gypsy improvisations in "Hungarian Dances" by Brahms?
" The more than slow" by Debussy with a jazzy improvisation?
Yes, yes yes!
A highlight of sincerity, emotions and also the rigor and accuracy of making music.

East and West, the history of many musical cultures which meet, works that remind of great composers such as Brahms, Debussy, Fauré, Bartok, Dinicu, but also, Django, Grappelli, Ellington, Jérôme Kern, Gershwin and some original compositions by Florin Niculescu and Paul Staïcu.
If a partition is the result of a creative frozen process, having known many steps, how do we explore these steps?
And can we do it again, live, part of the path that led to its current form?
More daring yet, the same way he could achieve otherwise?
Keeping aware that this is an act of boldness that involve risks, some caution is required.
Venturing beyond the written letter is always performing on a wire, should it be remembered?
Also, the choice of repertoire, the angles of attack as the degree of freedom that grants itself, everything is considered extensively.
Further on we want to initiate, best one should know its soil ...
At the end this can be one of the most exciting ways to approach music.

Program - Foreword
Interpretation of a partition, to read the notes, keeping tempo and shades, get the right level of musicality...
All these essential elements express the music as written. Obviously, making a partition is the first level of interpretation.
Yet "interpret" also holds another deeper sense, more open, less obvious.
Immediate access key to a piece, the partition is also the entrance lane to the world in which it is derived.
In this amplified dimension one reads more than the notes, it captures unwritten intentions, other possible choices, even optional versions - in a word, we read between the lines. Precisely here appears the difference between making a partition... and interpret it. Precisely, the emerging gap between individual (this partion) and general (a style, a time, a school) makes all the difference - and worth to risk it.

Some examples:
It is well known that J. Brahms loved the gypsy musicians of his time. His presence in many of these concerts is attested - and many of his compositions were inspired by the music. Only one partition always focuses on a particular form fatally fixed idea, was it the best choice. Although the main feature of gypsy music is the freedom, improvisation, the idea of the moment: the real typical oral transmission of Eastern Europe.
Brahms will thus have "closed" a partition by selecting a version among others, in accordance with the style we "reopen" to explore just what might have happened to another (for example during a concert of furious improvisation). The French Impressionism has greatly influenced jazz in the early Twentieth century, as we know.
Further expanded impressionist harmony type is one of the foundations of jazz. In several compositions, G. Fauré already foresaw these developments keenly, his melodies and harmonies are based.
Well, what would happen if Fauré had lived three decades later, having subsequent harmonic developments?
What would he have chosen, how could these same compositions ring?
If, as suggested in the introduction, improvisation precedes composition, can we make the reverse journey here: search in the logic of the composer, the developments that have pleased him, in the direction of his music? As for the so-called popular American composers - J. Kern, I. Berlin and R. Rodgers, G. Gershwin and others - they have never ceased to integrate knowledge of the European tradition of harmony, structural work, orchestration, etc., in search of a unique pluralistic music.
Gershwin will go so far to request lessons from Ravel!

What better proof that classical, jazz, improvised and written are just facets of the same entity: Music. In all these cases - as in so many others - there is room for interpretation as described above.
This is exactly what we do: we interpret!
Paul C Staïcu