Written by Florin Niculescu musical arrangement - Constantin Arvinte, Florin Niculescu, FrançoisThéberge
The work composed by Florin Niculescu Gipsy Rhapsody - for symphonic orchestra, violin, guitars, (piano), bass and drums, was given its world premiere on October 16th 2004 with Pasdeloup Orchestra directed by Paul Staicu Sr. This work, which transports us into the rich and unique world of Florin Niculescu, takes us on a journey at the crossroads of various cultures, far from being opposed, meet and complement each other naturally.

Florin traces the genesis of Gipsy Rhapsody with a lot of depth and emotion:
"The idea of this work highlights two names Django Reinhardt and Stephane Grappelli, French jazz pioneers, legendary musicians of the twentieth century, whose unique unit is recognized worldwide. It is also a synthesis of feelings about the places where I was raised and where I grew up, the taste of freedom, which is fundamental and inherent to an artist. I strongly felt the desire to mix the sounds of different instruments in a symphonic orchestra and the resulting power."

The first part of Gipsy Rhapsody, for solo violin and orchestra, is the musical and cultural roots of Florin.
This work naturally germinated in his mind at the confluence of various cultures, it also connects to the creation of classical composers like Bartok or Enescu who had strong links with the musical traditions of their country and made a very important work in the collecting, in especially with the gypsies.Deeply anchored in his roots, Florin wanted to create a world "where musical phrases tell the story of traditional sound of the greatest musicians that perpetuate a very strong oral tradition. This popular sound is totally natural to me so I threw on the score sentences of this work in a spontaneous way."
The last part of the work, after an improvised passage is a tribute to French music. Indeed, Florin feels a very acute impregnation of French culture (Claude Debussy, Maurice Ravel ...) in many places in Paris. If Florin creates this bridge, it is more in the mind than in the songwriting. The work ends on a high note: all musicians - jazz and symphony orchestra - come together in perfect harmony for a particularly brilliant final.

When reminders, highlight of the show, the jazz trio improvises a Django Reinhardt medley :
the public under the spell can take the full measure of hitters he listens, the orchestra joins the trio for a second bis which are interpreted topics such as Minor Swing, Bolero Troublant or Anuman. These topics were the subject of an Harmonia Mundi disc in March 2005: Djangophonie.

This recording was the result of the previous work of Florin Niculescu, namely an original reinterpretation of the work of Django Reinhardt, incorporating a classical quartet and an acoustic gypsy jazz formation. From there emerged the idea to develop and extend these arrangements in a more brilliant dimension. The density of these interpretations clot so dazzling homage to these iconic musicians were Django Reinhardt and Stephane Grappelli.


In 2005 Florin performed "Symphonic Django"
with great musicians and orchestras
from around the world! 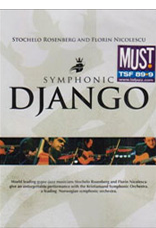